During my early years, after receiving a draft notice, I ended up volunteering for four years in  the Army Security Agency.  A year in tech school at Fort Devins in Massachusetts  was followed with three years in Okinawa and Thailand.  In both places my responsibilities involved gathering electronic intelligence from Vietnam, Korea, and China.  Many long boring hours were spent in front of a bank of equipment, yet I was not walking through the jungle carrying an M-16.  Life was comparatively good!

While in Thailand, I was stationed in a small city called Ubon, which is about 30 miles from the border with Laos and Cambodia. There were about thirty young men stationed there, and even though the work was long and hard, the off-duty time was beyond description. The closest I came to serving in Vietnam occurred during a flight on a C-130. I do not remember where my ultimate destination was, but we made a scheduled landing at Tan Son Nhut Airbase in Saigon. Several soldiers departed, while others joined us. I never left the airplane! We were on the ground for two hours, and for the entire time, two jeeps with M60’s stood guard on either side of us. It was a very uneasy layover.

My first overseas assignment was at Torri Station in Okinawa, which was adjacent to the village of Yomitan. One lazy Saturday afternoon, several of us were playing softball, and after a well hit ball, I decided to stretch it into a double. While sliding into second base, I heard a loud crack. There just happened to be a small stick firmly placed in the ground to secure the base. The noise I heard came from my ankle, which I managed to break in three places. It never correctly healed, and even now I have a difficult time walking down hill without a noticeable limp.  Therefore, even though I can be “technically labeled” a disabled veteran, my experiences are entirely different from the many thousands who faced unimaginable sacrifices and dangers.  An ironic sidebar is that my “home” so many years ago in Sobe at Torri Station was only a short drive from my home while I was later working at Kubasaki High School severalyears ago.

In many ways returning to Kubasaki was like completing a life circle. My first nine college credits were actually taken within the very walls where my classroom was located. There were many evenings when I would drive down after work from Torri to Kubasaki in my Ford Ranchero on the right hand side of the road and attend classes in Japanese,  and U.S. History. I also saw James Brown in the school gym after class one night. Kubasaki has many fond memories for me both as a student and later as a teacher. 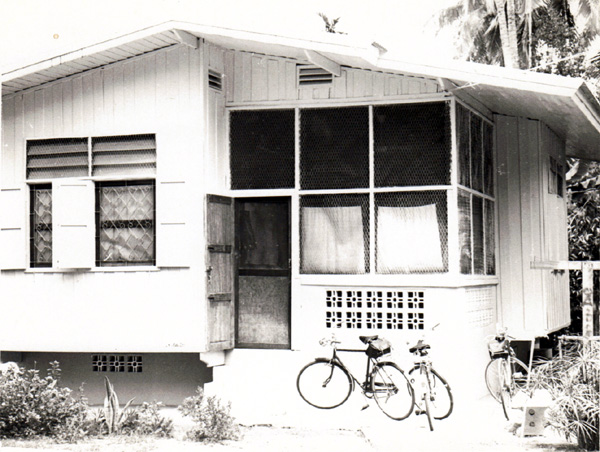 My First Home in Ubon

One of the most profound experiences I had while serving overseas occurred during my duty in Thailand.  During that time I shared a house with perhaps my two closest friends ever, Doc and Bob.  Our little home was a sanctuary from the twelve hour work days and thoughts of home.  A constant diversion was our pet monkey, a gibbon named Leaky.  He loved to go everywhere we went, even though throwing Coke cans around the house in the early hours of the morning was not the most endearing way of awakening us. 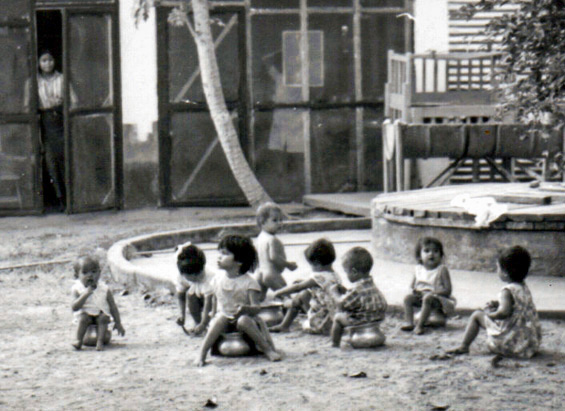 “Potty” Training at the Orphanage

A major focus of our time and energy centered around a Catholic school and orphanage, “Wat Roman”. It was located within walking distance of our house, and Bob was the first to discover it. It did not take long for it to become the center of our lives There were about sixty young children living at the orphanage ranging from infants to approximately six years old.  The majority of the children were female since it was felt that they did not have the same value in their poor agrarian society.  We would visit the orphanage several times a week to feed, change, and play with the children.  There were two nuns who managed the day-to-day routines of the children with the help of about ten teenage girls. 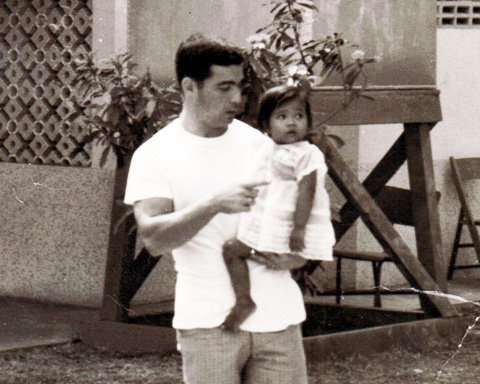 I will never forget the first time I walked into the courtyard, and a little girl grabbed my leg.  Her name was Yancey, and as my time there passed, she became especially dear to me.  She had just learned how to walk, and wherever I went she would always follow me.  I even had a small seat mounted on the cross bar of my bicycle, and she loved to tour the city with me.  There were even nights when I would visit after all the children were put to bed, and I would walk around and just watch them sleep.  These were days filled with many emotions, and when I was discharged from the Army and  left Doc, Bob, my first home, and especially Yancey, there was a feeling of sadness.  As the years passed I often wondered and worried about her.  Life for a poor young woman in Asia can often be brutal. 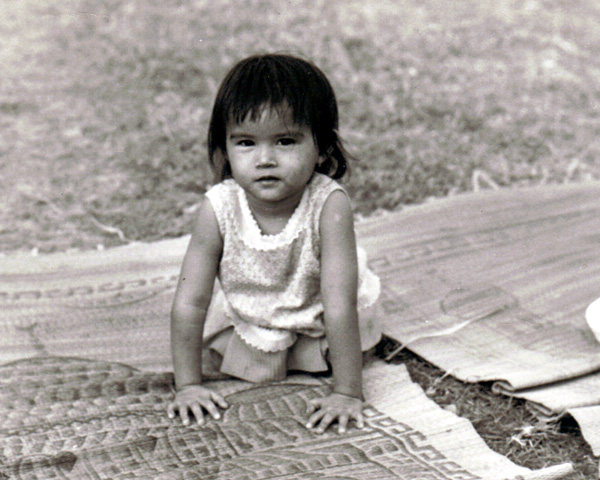 It was not until about twenty years later that an opportunity arose that enabled me to return to Ubon – the work/study program in Japan.  While on a vacation from my duties in Yokohama, I flew into Bangkok, took the twelve hour train ride to Ubon, and road a samlor to Wat Roman.  I met the mother superior, who just happened to have been a foreign exchange student in Massachusetts while I was originally stationed in Thailand.   A major problem developed in locating Yancey since in all the official records, the children were naturally listed by their legal names, and Yancey was a nickname. Mother Felicia was very cooperative and took me on two day trips into the countryside to meet with the two nuns who used to manage the orphanage.  We even found one of the young girls that had worked there, who was now married with four children of her own. 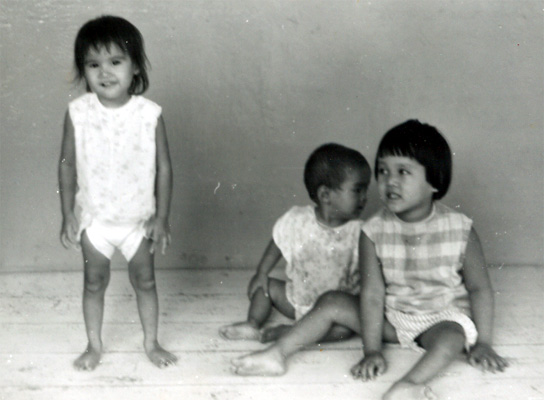 It was wonderful to see all of them after such a long time, but since there had been so many children at the orphanage, and they only referred to them by their nicknames, they were now unable to identify her. After spending many hours with Mother Felicia researching old records and narrowing the official list of names based on Yancey’s estimated age, it was determined that she must have been in a group of children adopted in Sweden.  I could not help feeling sad as it became apparent that I would never be able to see her again, yet I also felt a stronger sense of relief. I knew she was well and had found a home, and that she is now a  adult with perhaps a family of her own. 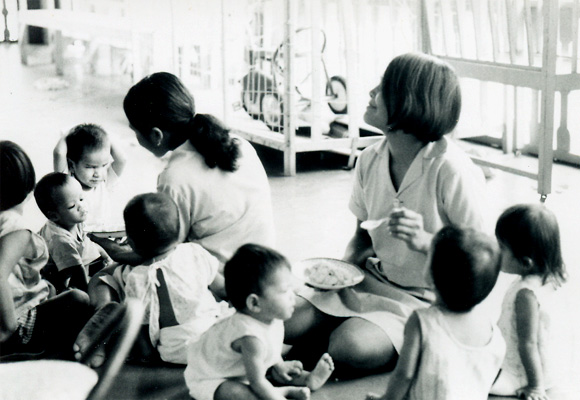 While in Ubon,  Doc, Bob and I spent many hours talking about our futures. We all entered the military right after high school, but we talked about the possibility of beginning college upon our discharge. On night Bob and I visited an older American in the city who was in charge of USIS, which directed money to poor farmers in the area. We had never met him before but we decided to visit him after dinner. When we knocked on his door and introduced ourselves, we simply told him that we wanted to “save the world and could he help.”  I have no idea what he thought of us, but he invited us in and served tea and cookies. After a long conversation, he say that before we dis anything upon our return to the states, we had to continue our education. He was one f the most influential men in my life, and I do not even know his name. However we all followed his advice. Bob, Doc and I did get out degrees.

In conclusion, I spent about four years of my life as a very young man in the U.S. Army.  Much of it involved long hours of very detailed work, but more importantly I know that I was basically extremely lucky. Those years, the people I met, and the men I worked with represented a time filled with unforgettable memories. 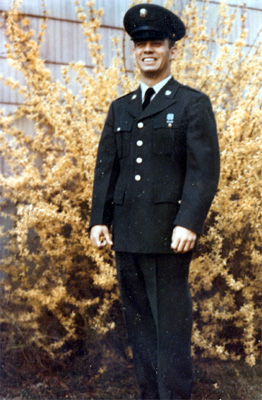