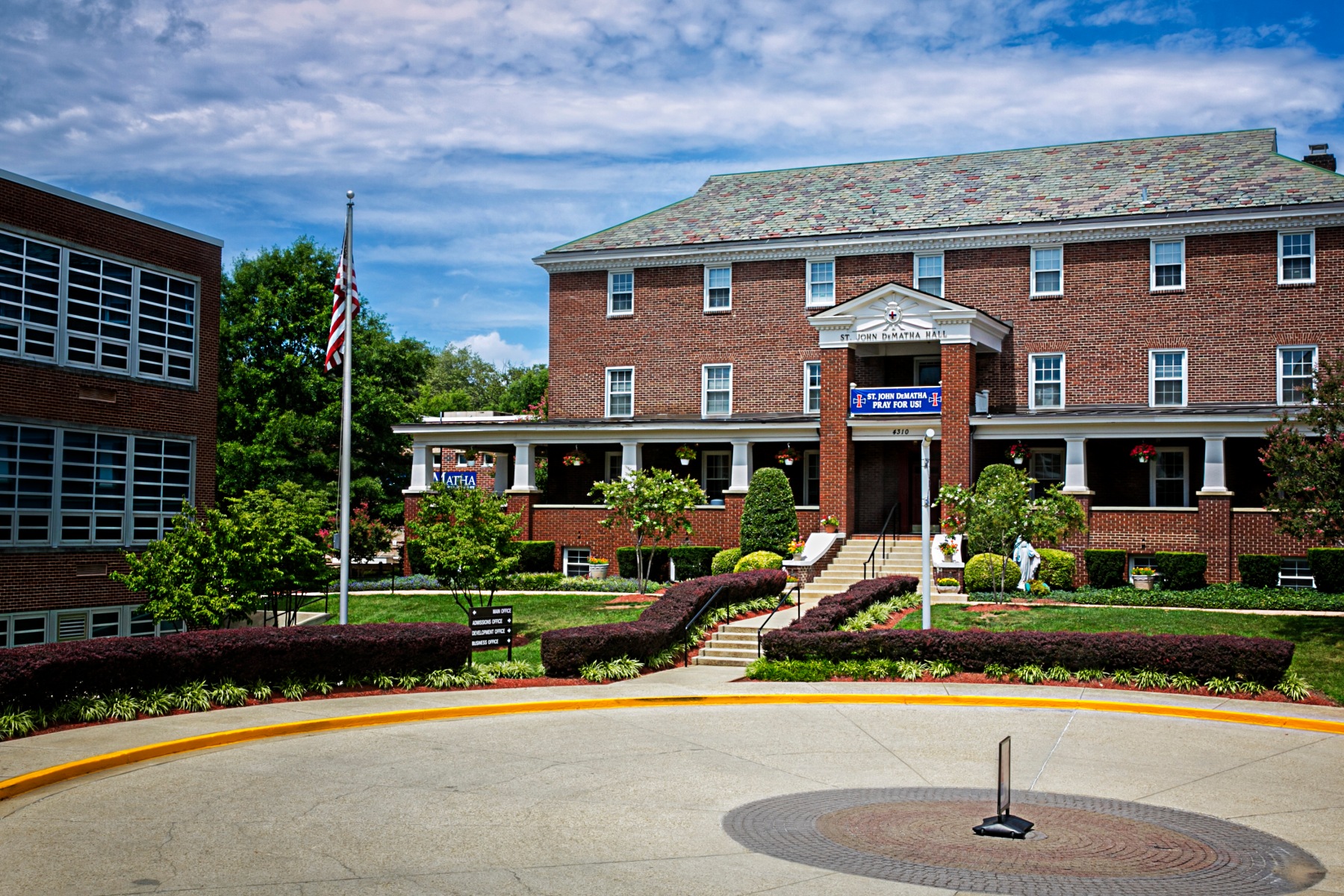 The Monastery at DeMatha

At the very mature age of thirteen, I decided to study for the priesthood.  To the delight of my parents, I enrolled at St.John DeMatha High School outside Washington, D.C., packed my bags, and entered the semi-cloistered life.  There were, depending upon the year, twenty to thirty-five “preps” who lived at the monastery studying to Trinitarians.  Our days were spent mostly in silence, prayer, work, or studies.  We awoke early in the morning, attended mass, ate breakfast, cleaned the dorms, and walked across the driveway to school.  On most days we had not uttered a single word to this point.  We attended class with the regular “lay” students, who wore the bright blue blazers. We wore black suits.  We were only allowed to talk to the lay students concerning topics that had a direct relationship to actual school, such as homework and other assignments.  They knew little about our life, while we knew little more about theirs. We ate lunch at our own tables, which were located adjacent to the priests and other teachers in the school cafeteria. This was the first time during the day where we were allowed to talk freely.  After school we played football or basketball depending on the season.  During this time we were required to be part of a team athletic event.  We could not go off and shoot baskets alone or even with a friend.  The emphasis was on being part of the group. 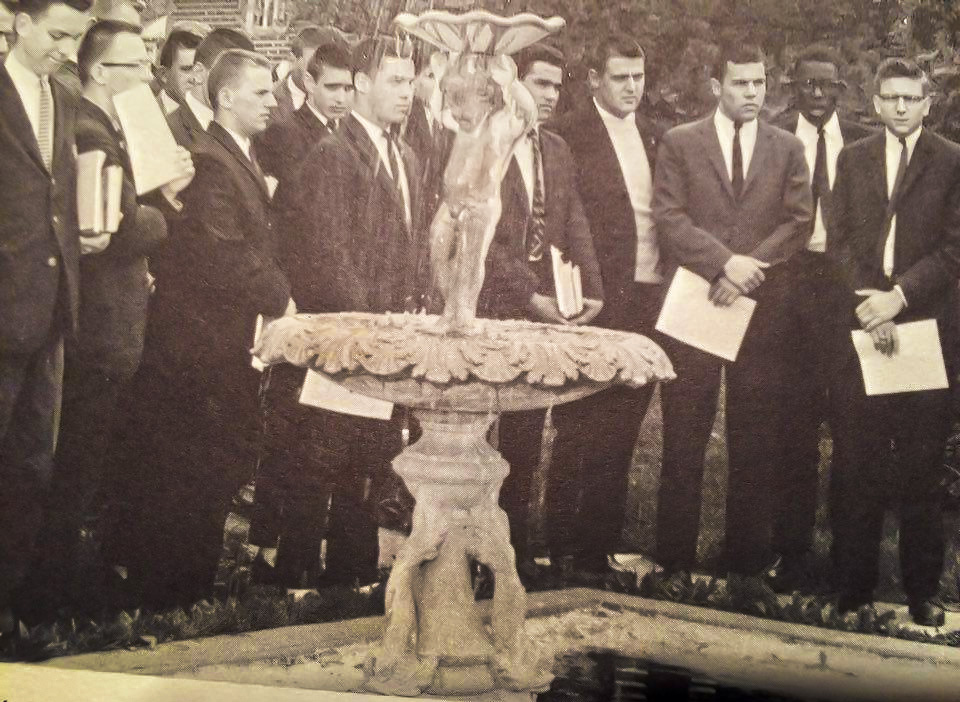 Prayers around the fountain

This relates to the most troubling aspect of seminary life.  We were encouraged to be friendly, yet we were prohibited from having a friend.  If we were observed spending too much exclusive time with a fellow seminarian, we were quietly counseled.  This very natural interaction was labeled a “particular friendship.”  It was not until years later that we discovered the major purpose of this rule.

I do not want to give the impression that the seminary experience was entirely negative.  How many high school students are required to take four years of Latin in addition to studying a romantic language?  We also spent about three hours each night in silent study hall with only one fifteen minute break. The weekends provided extra hours for study especially if we received a deficiency from school. Televisions, radios, stereos, and newspapers were non-existent.  One exception occurred when we were allowed to view part of JFK’s funeral. School athletic events on Friday evenings were the main form of entertainment. DeMatha brought a level of excitement to high school athletics that to this day is unmatched.  Seeing DeMatha defeat Power Memorial High School of New York with a young Lew Alcindor (Kareem Abdul-Jabbar) playing center at Cole Field House in front of almost thirteen thousand fans is still one of the major thrills of my life.  It was the only game Kareem ever lost in his high school career.

The athletic program at DeMatha was a joy to watch, and it continued to grow and improve as the years passed. Sports Illustrated Magazine recently credited DeMatha with having the number two athletic program of any high school in the country. Morgan Wootten, my former social studies teacher and the school’s basketball coach also holds the distinction of being then only high school coach to be inducted into the NBA Hall of Fame.

The games were even more important since they were the only times when we were in remote contact with students of the opposite gender – girls.  These were creatures that were both mysterious and forbidden.  We were told that there was no reason for us to even talk to them since they did not exist in the cloistered life. The rules could not, however, prevent us from looking at them.  We were very much aware of the individual cheerleaders, who attended the local girls’ Catholic school.  Looking at them discreetly and thinking of them later provided the main content of Saturday’s confessional.  As years passed I often wondered how I would have been able to counsel them if my training was to avoid them! 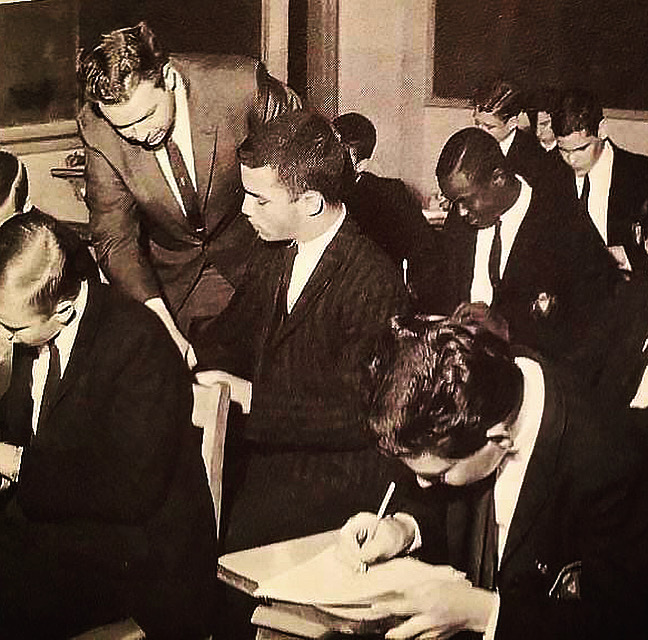 In my 10th grade English class with Mr. Carney

Another memorable moment concerns a visit to a local college.  We would often travel to D.C. to see various plays or museum exhibits, but one Sunday afternoon we took a bus to Catholic University.  A limited engagement play was being performed as a fundraiser for the school, and that Sunday the religious community was invited for a free performance. I do not remember its name, but I will never forget seeing the leading actress, Helen Hayes. There was one scene where she gave this phenomenal emotional outburst.  Even at the age of sixteen, I knew I had seen something truly exceptional.

The strange outcome of this entire experience concerns the lives of all the seminarians.  During my stay, not a single one of us persevered and was ordained.  Each of us did, however, choose a vocation that related to a concern for people.  The major problem that we all faced dealt with skills necessary to reenter society and interact with people.  By the midterm of my senior year, I was almost completely desocialized.  The feeling was common to us all.  I left DeMatha shortly after Christmas break, much to the regret of my parents.  I guess after I had guaranteed their place in Heaven, they were now a little concerned about their new destination.

As the years have passed, it has become difficult to evaluate my experiences at DeMatha. Many good things occurred there – meeting lifelong friends, experiencing a classical education, and developing a sense of true independence. There were also some negative aspects that took years to put into perspective – missing out on normal high school activities and learning how to interact with the world. As an adult, I realize that we are all a sum of everything we touch and all that touches us. Good or bad, I am the person I am today due in large part to my life in the seminary.